Vanuatu was reported to become the first country in the world to legally ban plastic straws. Since 1 July 2018, it is officially an offence in Vanuatu to sell single use plastic shopping bags, plastic drinking straws and polystyrene boxes. Manufacturing or giving away of these products are also illegal.

The Government’s decision to ban these items was supported by data from litter clean-ups conducted by the Vanuatu Environmental Science Society (VESS) and the Department of Environmental Protection and Conservation. Since 2015, a considerable amount of plastic bags and polystyrene take away containers have been collected around Efate Island. The high record of plastics greatly impacts the marine life and destroys the environment. 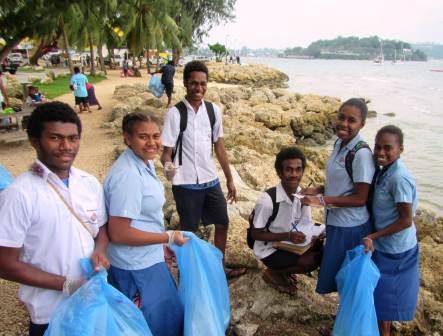 Malapoa College Students at the Seafront Litter Clean Up and Survey in Port Vila (VESS, June 2017)

The Prime Minister announced on Independence Day 2017 that the Government intended to ban single use plastics. In January 2018, the regulation was announced with the ban coming into effect in July 2018.

The information about the ban immediately spread through news reports in the local media. Further, awareness was raised through social media and radio and television interviews conducted in Port Vila. The Department of Environmental Protection and Conservation distributed posters, information booklets, pamphlets and stickers about the ban to communities in urban areas and across the outer islands of Vanuatu. Primary and Secondary Schools in Vanuatu also participated in a singing competition on plastic ban just before the ban became effective.

VESS in collaboration with ‘No Plastik Bag, Plis’ organised a plastic exhibition held in Port Vila. The exhibition aimed to raise awareness on the impacts of plastics on the environment, particularly the impact on the marine life. Information about the ban was put up at the exhibition. This made people became aware of the plastic ban. Also, visitors who came to the exhibition made their pledge to stop using plastic bags.

With assistance provided by non-governmental organisations, environmental leaders on the outer islands of Vanuatu who had many experiences in promoting awareness on resource management issues as well as ensuring sustainability of natural resources spoke to their community leaders, community members and to shop keepers about the ban. Around Vanuatu, information about the ban also spread from one individual to another.

The decision about the ban already has a positive impact on people’s livelihood. It provides a greater opportunity for locals to revive traditionally woven baskets and to utilize local materials to contain food and beverages. The uniqueness of the local baskets not only signifies identity, culture and pride but most importantly shows people around the world that locals care for their land and marine environment.

The Port Vila handicraft market is the best place where anyone can find amazing and creative local handicrafts. Weavers at the handicraft market, known around the country as “Mamas”, use Pandanus fronds and leaves of a local palm-like tree to create different styles of traditional island baskets. The selling of these local items not only provides income to Vanuatu, but promotes Vanuatu as a clean, safe and happy destination to tourists as well as locals.

VESS and other non-governmental organisations supported the public by providing calico eco-bags. These bags are imported but are designed and printed in Vanuatu.

It was a bit hard to change the mentality of the people to use traditional baskets instead of plastic bags. However, people have adjusted to the new law. They are now using all sorts of local baskets to transport their goods or when they do their shopping. In the main urban areas, many locals carry local bags with them.

According to the pollution section in the Department of Environmental Protection and Conservation, 80 to 90 percent of companies or businesses complied with the new regulation. Yet about 10 to 20 percent are still using plastics in the country illegally. Some local people and some small local business owners do complain for not using plastics anymore, but as months have gone by they managed to use alternatives. VESS has analysed litter data collected in September 2018. They identified that there was a drop in the number of these banned plastic items.

Vanuatu is known for its beautiful beaches, spectacular reefs and clear waters. The plastic ban means visitors can appreciate the attractiveness of the islands without seeing lots of plastic pollution. During some environmental workshops conducted around the islands of Vanuatu, people say the ban has brought a positive change in their communities. It is cleaner than in the past and it gives the chance for the marine life to survive.

The Government is now looking at the second proposed ban on a set of single-use plastic items. This includes all plastic packaging of fruits and vegetables for retail sale; forks, knives spoons, plates and cups designed for single use; stirrers/swizzle sticks; disposable nappies for babies; and artificial flowers.

About the Author
Martika Tahi is a Project Officer with the Vanuatu Environmental Science Society.
She is a Vanuatu national and holds a BA in Environmental Studies from USP.